Forth Season of Life Under The Horseshoe on hold

With three enormously successful seasons under their belt, Crazy Club Productions has put the fourth season of Life Under The Horseshoe on hold. This delightful “old time” weekly radio show produced and recorded before a live audience and broadcast from the historic Victory Hall in down town Spring City, Utah, will not be “in production” this season but “reruns” of the first three seasons will continue to air on station KMGR FM 102.7 and 95.9 every Saturday at 7:00 pm.

The producers are focusing on getting the show syndicated (selling broadcast rights to multiple network stations) nationwide. They feel that three extremely successful seasons demonstrations not only quality of product but longevity as well. Said Producer, Vicki Allen, “We recognize that not having a live performance to attend will be disappointing to our growing and tremendously loyal ‘live audience’ and we apologize for that, but until we get syndicated, we don’t have sufficient funds to hire staff and we simply cannot do everything at the same time. When we are in production, we hardly have time to mow our own lawns. But, they can still listen to the reruns each Saturday night, of their favorite shows from the last three seasons.”

Said Producer/Writer/Director Lawrence Gardner, “The sponsors and box office have covered the hard cost of the show since the second episode of the first season; in fact, we have even recouped our startup costs, which were considerable, but everyone has been working on community theatre basis, meaning no one gets paid (including the producers) and we need to take the show to the next level.” Said Producer/Show Host Mark Allen, “When we get syndication, we will immediately start up again, and then we will be able to pay for the excellent talent our show family has been contributing.”

The popularity of the show has grown steadily among the listening audience wherever it has been broadcast (between Kanab and the “point of the mountain” and from Delta to Price). The engaging stories, outrageous old time dramas, and wonderful musical talent has become almost a “listing must” with the locals and, although the show does not broadcast in the Salt Lake City area yet, “word of mouth” has brought more and more of the live audience down from “up north” each week.

Crazy Club Productions could not be more pleased with the progress and development of the show. From the outset, they were very aware of the challenges of producing a weekly radio show of this magnitude and level of professionalism and this move was well planned for. Having produced over 45 episodes, CCP believes it is time to promote the show to a wider audience and “put this show on the map” so to speak, by approaching prospective buyers of network stations.

The producers wish to thank not only our listening audience but especially the cast and crew who have worked so hard to make Life Under The Horseshoe the success that it has become. We look forward to seeing you all next season or sooner if thing progress fast enough. 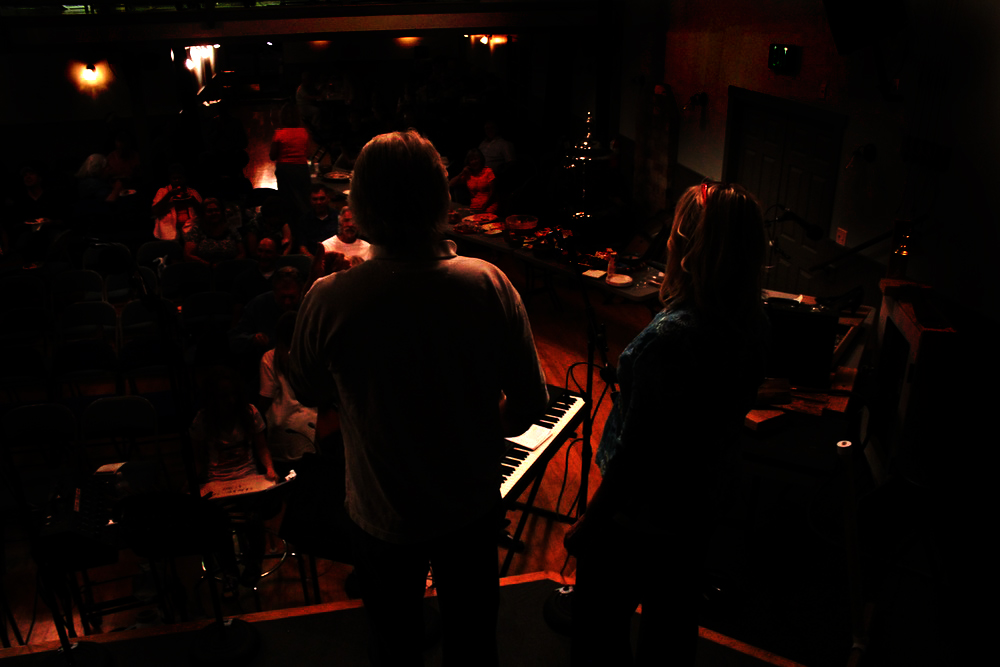 Forth Season of “Life Under The Horseshoe”

With two enormously successful seasons under their belt, Crazy Club Productions is excited to begin its third season of Life Under The Horseshoe, a one-hour “old time” weekly radio show.  It will open on Saturday April 18 and run to July 25th.  The show’ is produced and recorded before a live audience and broadcasts from the historic Victory Hall in Spring City.  It airs on station KMGR FM 95.9 and 102.7 every Saturday at 7:00 pm.  The producers are now in the process of syndicating the past season’s shows nationwide.

If you have never been to a live recording of a radio show, you are in for a unique experience and very special treat.  Each week is a whole new show that features stories of life in rural Utah from the 1850’s to the present, live music by local musicians, and a “serial drama” with sound effects, just like in days of “old time radio dramas”.  The audience members often provide background sound effects such as sheep bleating, cows mooing, dogs barking, etc.  The show is very much like A Prairie Home Companion that has run on PBS for years.

Life Under The Horseshoe is the creation of Mark and Vicki Allen and Lawrence and Lana Gardner, neighbors in Spring City and owners of the Spring City Inn and Victory Hall, respectively.  Both couples and have fallen in love with the area, its history, humor, and ambiance, and now they want to share its charm and heritage with a wider audience.

Victory Hall is also a quaint delight for the audience.  It began its life as a vaudeville house then became a “silent” to “talkies” movie theatre.  The Gardners have restored it to its former glory as a live theatre, complete with sound and lighting system, and beautiful handmade light fixtures.  The building has won the prestigious Utah Heritage Foundation Award for restorations.  On stage is also a charming three-dimensional set depicting the old time town of Spring City.

Gardner, a filmmaker in his previous career, along with his writing group have created stories, characters, plot lines, and gimmicks that will reoccur through the series of shows.  Allen is the host of the show.  His background in playing classic rock, folk and bluegrass music and producing music festivals has given him many friends and contacts that he recruits to help create the show’s musical interludes.

Crazy Club Productions is well aware of the challenges of producing a weekly show and needs lots of help.  They not only keep an “Open Call” for writers, but actors, musicians, musical groups, stage and production assistants as well.  Participation is on a “Community Theatre” basis, meaning low budget and no pay, but there is lots of fun to be had, and experience, exposure, and credits to be gained.

To get involved, contact Lawrence Gardner at 435-462-9145 or email at lawrence@crazyclubproductions.com.

Tickets to the live recordings may be purchased on line during the week prior to the show you want to attend for $10.00 at Life Under The Horseshoe website or at the door.  Pre-order group bookings at discounted rates, are available for corporate, church, or other organizations.

Note:  The audience must be in their seats by 6:30 pm and because it is recorded “live”, please, no babes in arms or unruly children.